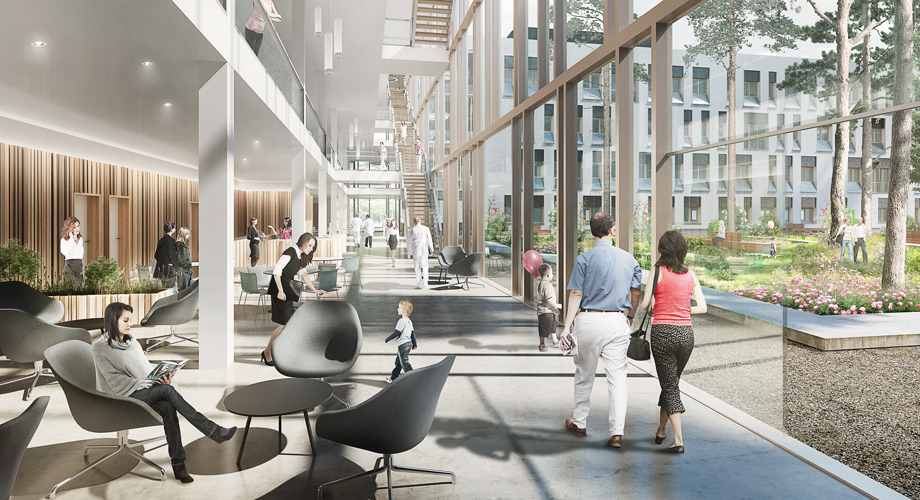 Dutch Hospital Design recently took part in a design competion for a new hospital in Michalovce, a town in Eastern Slovakia. The competition arose from Svet Zdravia’s (client) ambition to achieve similar high healthcare standards to Western Europe and to consolidate various healthcare facilities in the region into one complex in Michalovce. The project involves a minimal renovation of the existing hospital of about 9,000m² and the addition of a new building of around 13,000m².
A core challenge here was how to strategically go about the placing of the buildings and functions on the site bearing in mind that the existing buildings would be demolished in the near future and further extensions and alterations should remain possible.
Dutch Hospital Design’s solution consisted of connecting 3 uniform building blocks which have links to the existing buildings. The new building has been laid out in such a way that it can function independently and offers space for future new additions. The uniform blocks have a flexible layout and allow for various functions and layouts for future renovations. The main infrastructure in all cases will remain unchanged.
The architectural treatment reflects this layout making the building legible for a visitor. The gap between 2 blocks has been widened making a clear entrance. The blocks consist of white plastered facades which are connected by transparent glazed passages allowing views to the surroundings and for daylight penetration. The internal facades and the facades where people come close to have a warm timber cladding. Whilst this architecture has a modern appearance it does however blend into the local architecture and thus by the local construction methods. In this way the risks and the building costs remain manageable and affordable.